It’s week 20 of working from home for me, and, as a colleague pointed out, that’s double the amount of time we’ve been in the office this year (assuming we hadn’t been out before flocking in unanimous flight to our abodes, therein to stay indefinitely). Not that it matters. It is worth noticing, however, that being habituated to one’s four walls—and don’t tell me your confinement isn’t rectangular; I’d have room-shape envy—enables one’s thoughts and feelings to amplify and creep into surround sound. That’s why it’s important to get outside and restore some equilibrium.

Three years ago almost exactly, I decided to “do something” about my seasonal allergies and get a skin test to identify my specific sensitivities. It’s a stinging, itchy process that involves small needles and is not fun at all, but a worthwhile price to pay for knowledge and hope that I could be immune tolerized to cat dander, ragweed, pig weed, and other plant-based allergens. The clinic then mixed a serum containing the top 10 culprits, which I faithfully pumped from an amber vial onto the mucosal surface under my tongue and held for 2 minutes (as it absorbed) before swallowing (mainly the remaining glycerine vehicle)—almost every day for 3 years. This is a form of sublingual immunotherapy (SLIT, an unfortunate acronym), which is so far not FDA approved but is an attractive alternative to weekly subcutaneous injections.

I didn’t feel much improvement, if at all, and gradually I even became more sensitized to certain foods—fruits I had eaten all my life started to make my throat tingle. Still, I stuck with it, and last Friday was the moment of truth: a repeat skin test. I should note that the scoring is not very precise as it’s based on ruler measurements of the inner and outer diameters of the wheals where the skin raises angry red bumps, and these can be a bit diffuse.

As I suspected, my scores were either the same or higher as they were 3 years ago. The reaction to cat dander seemed smaller (it wasn’t the enormous welt I had last time), but with rechallenge to confirm, the final number came out the same. The allergist told me that it’s “very rare” for people not to respond to SLIT, and when I pressed for a percentage, I was told it was about 1%-5%. I haven’t been able to verify this with a cursory literature search, as the results are mostly presented as average reductions in nasal symptoms. Needless to say, despite having braced myself with expectations, this has been quite disappointing. Who wants to be in this kind of “the 1%”?!

Fortunately, during the very itchy wait, I had my recently purchased copy of Perfumes: The Guide 2018 by Luca Turin and Tania Sanchez, whose dry wit and merciless hilarity got me through (although the level of demand for intellect from their audience can be quite high sometimes, so I had to reread the same reviews several times while resisting the urge to scratch and run). It was in this book (later) that I learned about the Monclin.

Any brief discussion I could find online about this contraption seems to have occurred in the mid-2000s. Apparently it’s basically a cognac glass with a hole drilled through the bottom, in which to insert a scent strip. Failing that, an inverted glass dome of any kind should do.

I got to experimenting right away. It seems obvious in retrospect, despite never having visited a Patou boutique where this debuted—it’s the same principle as the bell jars covering candles for display, isn’t it? 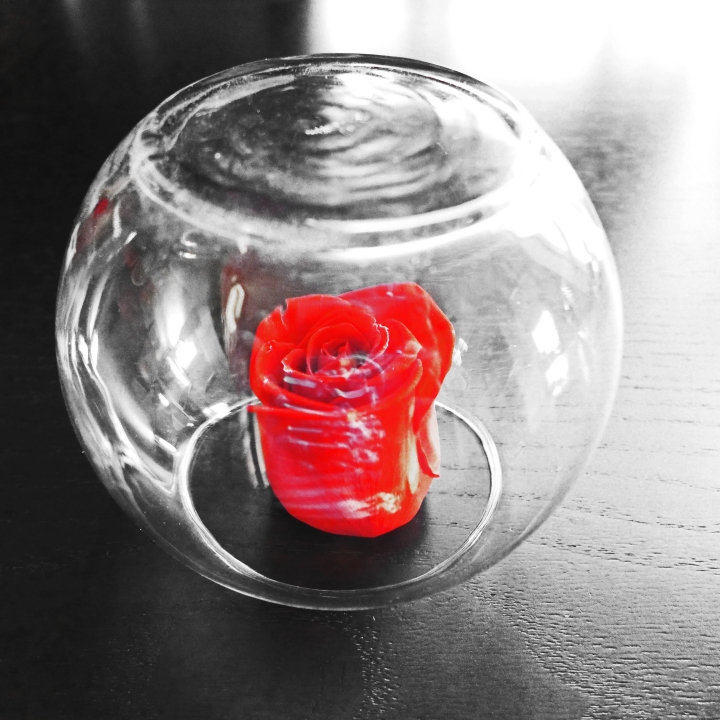 This simple, stupid idea truly is amazing. You cover the scented object you want to smell, leave it for a couple of minutes, and lift the dome to your nose. It really is a more “3D” experience, with the particles of different volatilities spread out. The technique is meant to allow you to smell the top, middle, and drydown notes all at once, and the effect is so much fuller than sniffing a scent strip directly. In fact, it delivers a snapshot of the whole scent even when the blotter smells depleted. Grab the nearest wine glass and try it.

Or maybe my curiosity is everyone else’s common sense. It’s credibly the olfactory equivalent of this party trick, where you put your cell phone into a plastic cup to amplify the sound from its meager speakers. (A cubical glass vase works, too…)

Perfume stores tend to feature tagines or funnels for the same purpose of sampling, but I favor spheres over cone-shaped objects. I’ve enlisted my other half to work some magic with power tools so we can try this properly, hopefully soon.

14 thoughts on “Amplify and surround—a different way to smell”