London, a vibrant city that juxtaposes the efficiencies of the new with the icons of the old. A city whose skyline has changed so much and whose pavements have stayed much the same.

A city breathing in many new smells thanks to the rise of niche perfumery.

I had done a fair bit of armchair research on perfume brands before visiting London this time, and despite dividing my sniffing territories up over about 3 days, the sheer number of fragrances to explore was quite overwhelming. I tried not to put any pressure on myself to sniff and remember everything. I also tried to focus on perfumes I would not be able to find easily in the United States.

Always a lively tourist attraction and source of inspiration, Covent Garden is lined with lovely boutiques and artsy stalls. You’ll never be far from good perfume in this area.

A new store selling perfumes and home fragrances made with natural ingredients from Africa. They were handing out Gardenia bracelets at the door. It was a powerful scent on the ribbon and reminded me of the conundrum of natural ingredients smelling synthetic and vice versa.

With such a generic yet absolute name, I wasn’t sure whether this was a chain or a single stall. I checked out a couple of perfumes with “oud” in the name, and the seller, who had been standing at a distance from her stall, came over to show me a “rose-vanille” option. Most of these are quite strong.

An interesting store with an industrial-chic layout, Bloom arranges perfumes by fragrance family. Here you can find niche perfumes from around the world, guided by very knowledgeable staff. If you are curious, you can ask to sniff real animal ingredients including civet, castoreum, hyraceum, deer musk, and ambergris. (Some of these are tinctured or exist in tiny quantity from previous sources, obviously non-renewable for ethical reasons.) 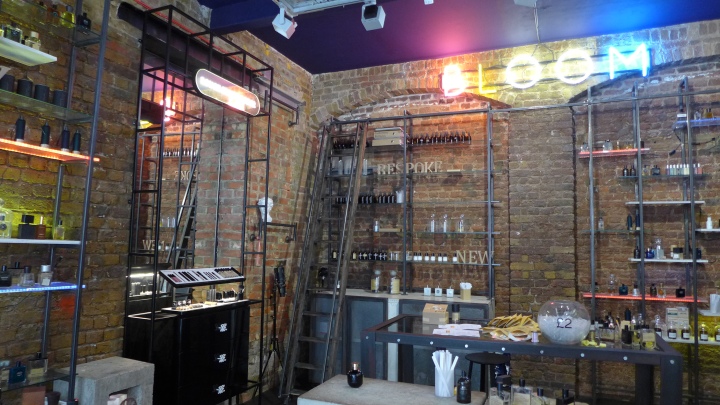 I had been looking forward to this, a relatively new brand creating scents that represented different aspects of London. The latest, Electric Rhubarb, had sounded particularly intriguing. Unfortunately, despite the vivid visual aesthetic, none of the 9 fragrances appealed to me. They all had a sharp, irritating note behind them that many modern perfumes seem to have. (I would soon get to smell Amber Xtreme™ by itself and wonder if that was it…) 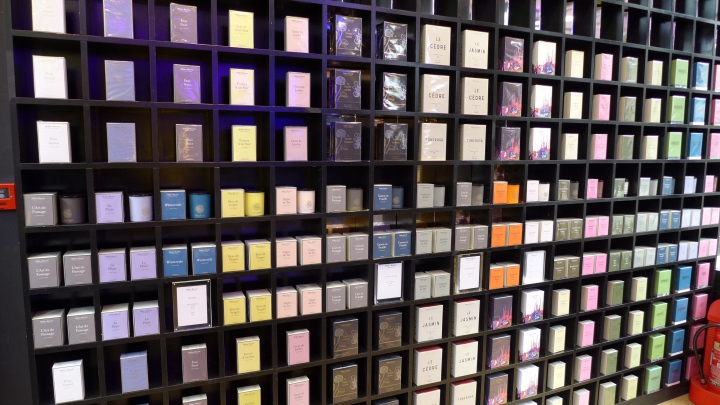 Yes, yes, they have Penhaligon’s in the United States. I have yet to go to one in New York. However, it’s like a staple in London and each store has the personality of its neighborhood. They cleverly arrange collections in repeats so even though it looks like a lot to take in, you need only stay in one spot to sample a whole collection.

I already have Duchess Rose and if I were to get another, it would probably be Savoy Steam.

According to TripSavvy, “If you only have time to visit one London perfume shop then this is the one to see.” Personally, if I had time to visit only one perfume destination, it wouldn’t be a single shop, but rather a department store. I would also consider Jovoy highly deserving of that comment. However, I don’t disagree with the statement, either—because Les Senteurs is a British original while Jovoy has its flagship store in Paris.

Les Senteurs is a very pretty boutique, and you can shop with help or be left alone. I chose to explore unaided in this particular instance, and left with a bottle of Tauer Perfumes’ Une Rose Chyprée after much sniffing, accompanied by various samples. They had Marc-Antoine Barrois’ Ganymede at the checkout counter—I almost impulse-bought it at first whiff, and luckily was offered a sample of it to try. 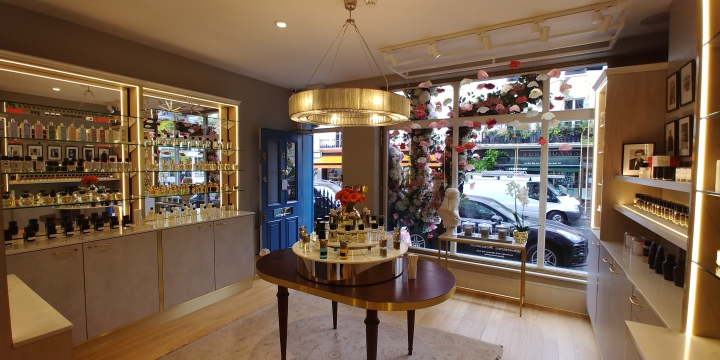 Here is a picture of Atkinsons in the Burlington Arcade, although I did not end up going in.

I came to the Burlington Arcade store specifically to experience the smelling column. I wasn’t sure exactly what to expect, but soon learned that it was one column inside which you could choose a scent to spray and smell in its purest form, as it was intended by the perfumer. I selected Music for a While for its pineapple-lavender-patchouli glory.

It really is “surround smell,” as I think of it—just you, the fragrance, and your head stuck inside a glass tube while conscious of being politely stared at by sales associates. Well worth a try.

Apparently it’s easy to clean, too—they push a button and a fan blows the mist away so no droplets stick to the walls of the cylinder.

This became one of my favorite perfume stores. At first it seemed a bit intimidating, with its long layout and dark colors (reminding me a little of Aedes de Venustas in New York, but not that dark). I started sniffing at my own pace, getting acquainted with many brands I had never heard of before, mentally bookmarking L’Orchestre Parfum’s Rose Trombone as one to buy.

Then I started chatting with a friendly sales associate who was very earnest about fragrance—he explained that Jovoy allowed them to make [their interactions with customers] “more about the journey” rather than pressuring them to sell any particular brand. He introduced me to an exquisite range of artistic perfumes and showed me their collection of ambergris—both “white gold” and “black gold”—housed in bell jars.

At the end of my enlightening “journey,” I left giddily with a purchase of Rose Trombone and a pack of Master Parfums’ Pocket Quiz (which I was excited to see they had at the checkout counter), along with the most generous amount of free samples I have ever received. 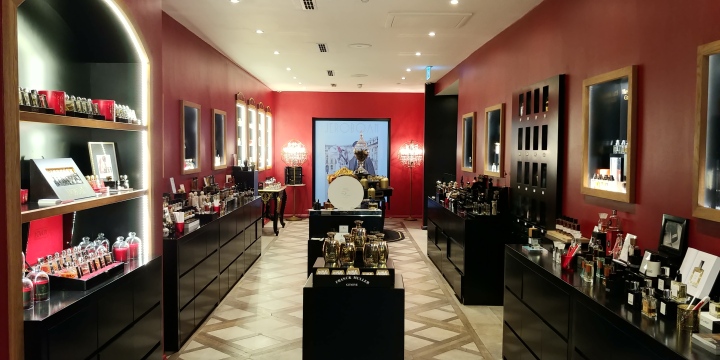 This compact store seems to have a principle of attentiveness to each customer, which also means that an unguided tour is nearly impossible. Each fragrance is displayed by an orange-white-swirly pyramid cone, and some fragrances have different options for concentration. At the back is a cabinet showcasing ingredients used in Ormonde Jayne’s perfumes.

To my surprise, I experienced anosmia to a fragrance for the first time with Isfarkand. I could smell neither concentration of it, even after stepping outside for fresh air, although I could smell everything else.

I bought travel sprays of Montabaco (probably my favorite of theirs) and Osmanthus (my new scent curiosity as far as ingredients). 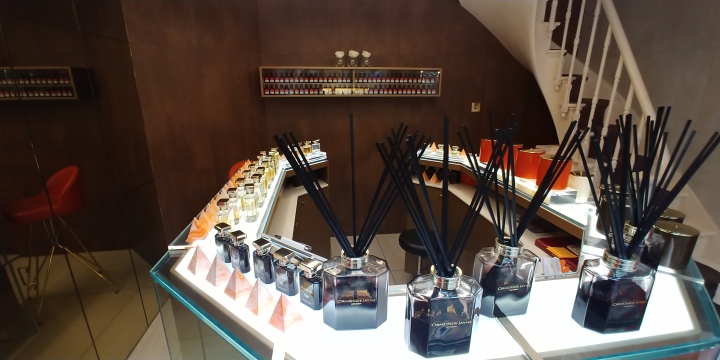 (Again.) This one mirrors the layout of other stores in the Burlington Arcade.

This happened to be the first place I got to sniff the Guerlain classics (albeit reformulated) Shalimar, Mitsouko, and Jicky. 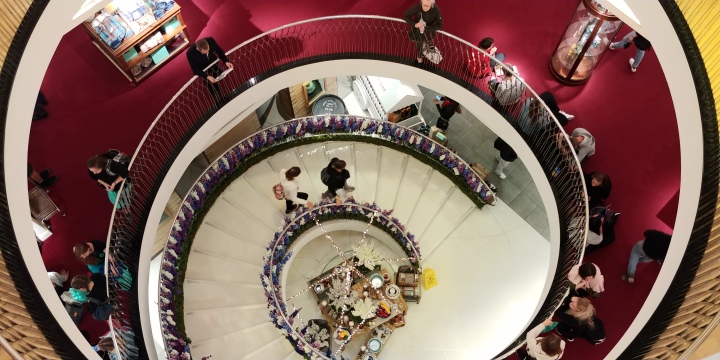 Another fascinating department store with a variety of designer clothes, houseware, and perfumes in manageable portions. I sniffed so many brands in quick succession that it became a bit of a blur.

Ah, Selfridges. A department store by label, a manifestation of innovation and creativity by merit. The perfume section easily becomes overwhelming, so it helps to have some idea of what you’re looking to explore. Besides my disastrous quest for St Giles’ The Writer, I also sought out Memoize and tried their heavily oud-forward collection.

(Side note: perfumery in London has a lot of emphasis around oud, and I’ve been told this is a fairly recent phenomenon. Most oud perfumes are way too aggressive for me.)

I also happened across Paco Rabanne’s just-launched Pacollection, based on 6 different “me” personas (as advertised on giant posters in Tube stations and elsewhere). A specialized setup has you choose your favorite activities to gauge your personality and assign you a fragrance. (Fun, but the worst way to pick a perfume!) You’re also supposed to wear headphones to listen to music to get you in the right groove while tapping the touchscreen, but I couldn’t do that and listen to the enthusiastic salesperson’s pitch at the same time, so I put them down.

Then a machine that looks like a cross between a showerhead, stereo speaker, and oversized baby powder dispenser spritzes said fragrance for you to smell it without distraction.

The innovation lies also in the design of the bottles—they are aluminum encapsulated in plastic so even if you throw one forcefully on the floor, it won’t break. (Way to go, Puig.) My favorite was Crazy Me, with notes of mimosa, wasabi (who wouldn’t want a perfume to say it has a wasabi note in it?!), blackcurrant, and sandalwood. The artificial intelligence in the fancy machine would never have guessed.

The Frédéric Malle at Selfridges has a smelling column, too.

All in all, a wonderful trip.

2 thoughts on “My brilliant sniffing tour of London”

© Nose Prose and Righting the Write, 2015-2020. All text and images are my own unless otherwise attributed. Excerpts and links to this material may be used, provided that full and clear credit is given with appropriate and specific direction to the original content.