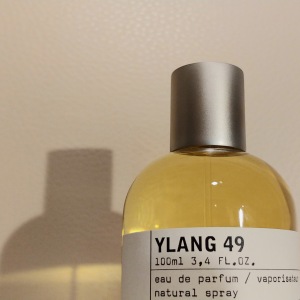 Ever buy something by weight and watch the vendor fill up your bag on the scale?

A story I was told as a child goes: There were 2 street vendors selling peanuts at the same price.

Who got more business in the long run?

Right. The one who seemed to underpromise and overdeliver by ending on an “add” rather than a “subtract.”

People like to feel like they got a little “extra,” even if it’s the exact same amount in the end.

When I opened the box containing my bottle of Ylang 49, I noticed that it was filled all the way to the top, such that there looked to be almost no air in the bottle. (I took a picture after having sprayed generously a few times, so it doesn’t show the full extent of its fullness.) I had to marvel at it for several seconds, turning it this way and that, mesmerized by how the almost nonexistent air bubble easily disappeared from sight at most angles.

Obviously, perfume is sold by volume, and some bottle shapes lend themselves more to looking overfilled than others. Still, there is something irrationally satisfying about getting a brand new bottle and seeing a very tight meniscus, knowing that every last microliter of liquid in there is mine, all mine!!!

Perhaps less of a practical consideration for perfume bottle design than for customer service attitudes.

© Nose Prose and Righting the Write, 2015-2020. All text and images are my own unless otherwise attributed. Excerpts and links to this material may be used, provided that full and clear credit is given with appropriate and specific direction to the original content.