It’s the end of week 18 of working from home for me, although my area has reopened with the requirement to wear masks in public still in force, for which I am thankful.

Last weekend, we made our first little “getaway” to a small town with several artsy and antique shops, and I was like a kid in a candy store in one of the bigger ones, keeping my eyes wide open for the sudden appearance of a tray of vintage mini perfumes among the organized-chaotic shelves full of trinkets. I may as well have stepped into an alternate universe, because the physical laws governing the linearity of time suddenly did not apply. To my shock and chagrin, every time I glanced at my watch, another 10 minutes had flown by, and I won’t say how many times this observation was reproduced…

I never found said tray, but the storekeeper did pull out some bottles from behind the counter when I finally asked.

It really was the cute bottle shape that got me—and it was cheap, so I bought it despite, not for, the juice. The fragrance smells like something from another era, because it is: from what little information I could find, the Somewhere cologne for women (different from the older Somewhere perfume) was launched in 1972 and discontinued in 1974. The scent is congruous with its yellow color and was probably a “floral aldehyde.” My guess is lily-of-the-valley, maybe a tinge of rose, with a honeyed background and ambery drydown, and something that I can only describe as “oily” throughout. It’s also a bit soapy or like lotion.

Sniffing a bit deeper into the honey, Somewhere cologne is quite fruity—I want to say maybe stone fruits, but it’s not really peach or apricot. A fruit or fruits with dense flesh. Elements of it remind me of Guerlain Mitsouko, a peachy chypre from which I smell much less peach than a particular tangy Asian “snack” called a haw flake. The flavor of this vintage confection wasn’t moreish at all, especially for children with a sweet tooth, and haw flakes are not as commonly found anymore as they were a few decades ago. These astringent, gritty, coin-shaped pieces are made from the fruit of the Chinese hawthorn. I can’t unsmell this in Mitsouko, but it’s not prominent in Somewhere.

I wish I could pick out more specific notes, but it’s pretty amorphous, and I couldn’t find a proper description or review, so this is pure guesswork. In any case, the 1 fl. oz.–bottle makes for a nice ornament, and as long as no one picks it up mistaking it for a nip of Crown Royal Canadian whisky, it’s all good. 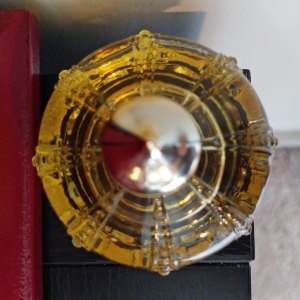