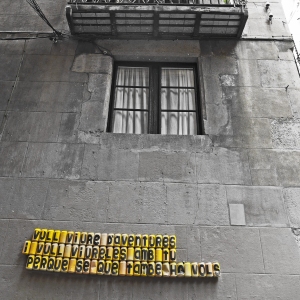 It’s happened with every perfume I’ve made so far. The first day, it doesn’t know what it wants to be when it grows up. The ingredients are still getting acquainted with each other. They’re mingling.

The second day, I’m almost afraid to open the vial. Who knows what they’ve decided overnight? I take a deep breath and twist the cap. It’s a moment of truth. Not the moment—oh, no, it’s way too early for that—but a moment.

Inevitably, my doubts are not unjustified. The mixture has morphed into something completely different from what I’d had in mind.

Smells can deceive, however. The pent-up vapors of the top notes are the first to rise and accuse me of amateurish ignorance, followed by the deeper notes wafting their “do not disturb” sign at my questioning nostrils. Leave us alone—come back in a few weeks!

On my skin, too, they reluctantly yield their inchoate miasmas, leaving one or two stubborn notes behind to dry after a couple of hours.

At this point, some creations have gone to my graveyard of failed attempts, to be replaced by better balanced versions. Even these must undergo the tribulation of day 2 blues, though they are more likely to survive.

Either that is the case, or enough time has passed to trick my brain into accepting them unconditionally, at least for the time being.